Mom’s Girlhood – Growing Up Nyonya – a recollection of the lost world of the traditional Nyonya household during the first half of the 20th century. 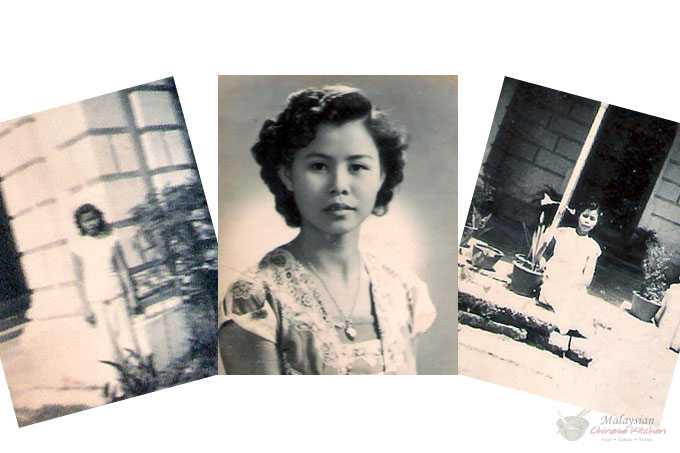 Mom grew up in the 1930’s and 40’s, splitting time between the ancestral home in Bukit Tambun, and the family townhouse in Trang Road, Georgetown. The family was once rich and affluent from sugar cane and coconut plantations but the crash of 1929 sent all kinds of cash crop prices tumbling. The youngest of five daughters, she did not enjoy the earlier opulence and wealth that her older siblings had once enjoyed. She always related to me about the leftover vestiges of a formerly grand household and how she and her sisters had to take on kitchen work once done by “orang gaji” (servants).

Although no longer rich, Mom was brought up by Granny to be a proper “Bibi” (Nyonya lady) so that the family would not be shamed in front of the future in-laws by a girl who could not cook or sew properly. Her day started early (about 5:00am) with a quick shower by the big dragon water urn at the corner of the second air well, and then to tie up her hair in preparation for a day at the kitchen. The morning hours were also used for doing the laundry, a tedious process of brushing and scrubbing on the wooden washing board, hand wringing and hanging up the washing in the back portion of the house in time to catch the morning sun. In those days, the baju panjang and sarongs were also heavily starched, an additional chore.

Once Grandpa or Granny returned from the fresh market in Prangin Road, the kitchen work began in earnest. As the youngest daughter, Mom was assigned the washing and cleaning of vegetables, and shelling the shrimps. Nyonyas were very fastidious about having these ingredients properly cleaned, and so the discovery of an improperly deveined prawn or a yellowing spinach leaf among the vegetables normally resulted in a painful “cubit” (pinching, a specialty of older Nyonyas). The older sisters took care of slaughtering the life chicken from the market, scrapping the coconuts or making the curries. The matriarch oversees the finer points of the kitchen like the grinding of spices, and making sure that the curries are cooked to the right consistency.

After lunch, Mom was confined to the house with sewing chores, making use of the afternoon light for needlework (this was before electricity). Nyonya girls were taught sewing craft as part of their education to become good wives. The first lesson was to sew her sarong into a tube. Spacing of the stitches were meticulously checked and often time require multiple un-picks before passing muster. The older girls learnt “jahit manik” or bead craft, in preparation for their wedding trousseaus. For every Nyonya lady, her “bakul ja’it” (sewing basket) became her personal possession that was off-limits to others. There was even a strong “pantang” (taboo) that forbid men from ever touching a woman’s sewing basket.

The afternoon hours was also a time when the older Nyonya women found their leisure hours of the day, since the men folk were out of the house . Unlike unmarried girls, the matriarchs could leave the house to visit other friends. A popular pastime was to play card games like “chee kee” while chewing “sireh” or betel nut and trading gossip. These informal social circles were necessary as the matriarch normally ran the finances of the household and used these networks for gathering information on what was going on in the wider world, and the all-important inquiries into suitable matches for their sons and daughters.

Many Nyonya girls looked forward to the afternoon hours when itinerant vendors would arrive at the houses to sell everything from bowls of noodles to beauty accessories. Some even provided services like fortune telling and knife sharpening. For the cloistered maiden, this was her only direct contact with the outside world during the day, and even then under the watchful eye of an older female relative. Girls were only allowed up to the second hall in the house (“Ji th’iah”), separated from the main hall by a screen so that visitors will not see them. Similarly, they were discouraged from peeking out of the windows, citing that only “bad women” displayed themselves thus.

After dinner, the kerosene lamps were lit and people settled in for the night. The main entrance to the house was barred with a heavy wooden pole across the doors and a second threshold piece placed on the floor to prevent snakes and spirits from entering the house. Mom learnt some of her English and Chinese by candle light in the women’s quarter (situated in the “loteng” or upper floor) from an older sister who was schooled in the Penang Chinese Convent. She recalled drowsing off mid-lesson and having her fringe singed by the candle flame. Somewhere downstairs, Grandpa was singing either Malay “dondang sayang” poems or Teochew ditties with a snack of “peh-hae-bee“ (dried shrimps) and wine in the cool of the main air well. It was the end of another day.

In memory of Mom on Mother’s Day.