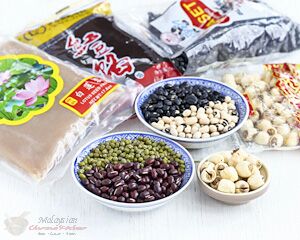 Beans and seeds are used in both sweet and savory dishes. They are often made into paste as filling for desserts or used in savory soups. Some like soy beans are fermented to make sauces and condiments.

Au tau, Asian black beans are soybeans, often found fermented. They are smaller than turtle beans with a larger white spot on the concave part of the bean. These beans are often used in savory soups and should be pre-soaked before cooking.

Mei tau (black eye peas) are a kind of bean that cooks rather rapidly. No pre-soaking is required. They can be used in sweet and savory soups. Sometimes they are mixed into glutinous rice dishes like chang (glutinous rice dumplings).

Lek tau (green beans/mung beans) are small beans that generally take a shorter time to cook. These versatile beans can be cooked with or without soaking. They are often used in sweet soups, made into a paste, or ground into flour for cookies or noodles.

Leng chee (lotus seeds) are usually found in the dried form. They are commonly made into a paste as filling for desserts such as steamed buns and mooncakes. They are also used whole in double boiled sweet soups and savory herbal soups.

Ang tau (red beans) are the most common and popular type of beans used in many desserts including ice cream. They do take a longer time to cook and pre-soaking is recommended.

Note: Images of the brands are not intended as promotion nor were they provided for by the manufacturer. They are only representations of the ingredient itself.