The Stone Kitchen – Traditional Culinary Tools in the Malaysian Chinese kitchen needed to extract, grind, and mill goodness out of unyielding ingredients. 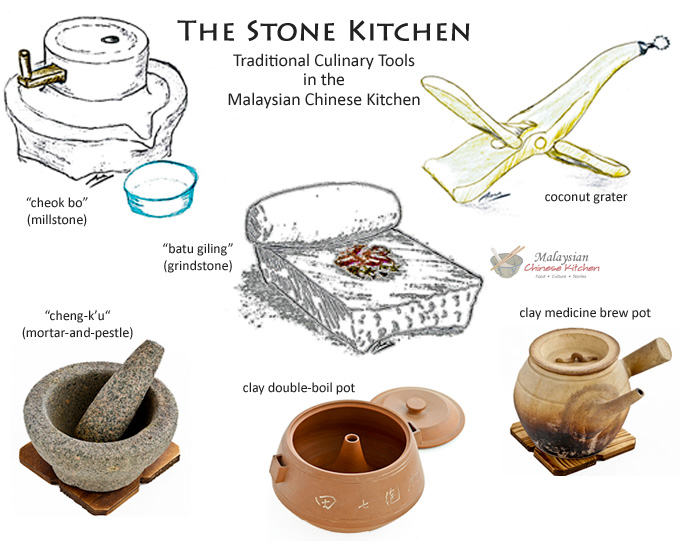 The afternoon was hot and sunny. I remembered feeling sleepy to the steady scraping sound of coconuts being grated. Strapped to Mom’s back with an old sarong, I was as comfy as any tropical baby could be. I rested my head on her shoulders and felt the gentle motion of the arms moving as she skilfully extracted every last scrap of white coconut flesh from the shells. That sensation was one of the earliest memories that I had of Mom.

Before the advent of electric kitchen appliances, the Malaysian Chinese kitchen was well-equipped with a variety of specialist manual tools needed to extract, grind, and mill natural goodness out of some of the most unyielding ingredients known to man. No speed settings, pilot lamps, or color coordinated technological wonders with touch screen features. All it took for most part was elbow grease, lots and lots of it. Plus a seemingly effortless dexterity borne from years of handling those same tools day in day out.

The most ubiquitous stone kitchen tool was the “cheng-k’u“ (mortar-and-pestle). Made from granite, a well-seasoned set was worth its weight in gold. The owner would have imparted her habitual motions into the shape of the pestle caused by constant wear as it grinds chilies, shallots and shrimp paste into sambal. It is not usual to attempt using someone else’s mortar-and-pestle as it all “felt different” or as they say in Hokkien “beh soon ch’iu” (not in the flow of the hand). The steady thump of the mortar-and-pestle close to noon time meant that lunch was about to be served.

The other important tool used almost on a daily basis in Peranakan kitchens was the “batu giling” or grindstone. This tool is the surest testament to the cross-cultural exchange that occurred among the races in Malaysia. The grindstone comprised of a heavy flat granite slab and an almost cylindrical stone pillow to roll along its length. It was used to crush and grind chilies, coriander, cumin, fennel, cloves and a large variety of other ingredients into a paste used for making curries. The exact motion used to perform this task is more like a semi-rolling motion with two hands on each end of the stone pillow. One of the pitfalls of using the grindstone was the occasional spicy bit getting into the eye, followed by somewhat colorful language that some Nyonyas are pretty good at.

A less frequently used stone tool that sat in a less busy part of the kitchen (ours sat outside in the wet kitchen, an enclosed courtyard) was the “cheok bo” (millstone). This tool gets cleaned out and readied for use close to major Chinese festivals when lots of rice flour was needed. The cylindrical millstone sat on a matching stone basin, the latter has a peripheral trough that collected the milled slurry and drained to a pointed tip into a collecting pot, normally lined with a clean linen cloth acting as a filter for rough grit. To turn the mill stone, a square wooden handle was inserted into a square hole in the millstone. A two person operation, the millstone was turned while rice grain and water was ladled into a feed hole at the top of the millstone. When I was a teenager, I got drafted into the role of turning the millstone and it was as good an upper arm workout as the most expensive gym equipment one can find today!

Folded away and safely stowed out of the reach of us kids was the fearsome coconut grater. This kitchen tool that looked like a medieval torture weapon was a wooden contraption with a folding seat and a grating blade attached at one end. The user sat astride the wooden seat (a delicate situation for people wearing sarongs) and grated the coconut halves against the blade in a practiced motion. A broad basin was placed directly below the blade to catch all the grated coconut flesh. Not for the careless or distracted, as one false move would have gruesome consequences. Yet it was on this “torture tool” that my happiest childhood moments were spent dozing off strapped to Mom’s back.

The last two items were more pots than tools but I decide to include them here because of their quaint appearances. The first one was the medicine brewing pot. This right-handed pot has a spout almost parallel to its handle and was unmistakable in its appearance. I feared this pot as a child because it meant that some terribly bitter concoction was on its way to a bowl near yours truly. The Chinese herbs used for the bitter brew gave out these strange aromas that announced the approaching ordeal. Mom always included a wrapped sweet plum preserve to help ease the bitter medicine down.

The second pot was a specialized double-boiling earthen pot with a funnel inside the main chamber. For use, herbal ingredients and meat were placed inside this pot without any water. The whole pot was placed inside a larger boiling pot filled with some water. As the water boiled the steam entered the earthen pot through the reverse spout and cooked the food inside it, keeping all the goodness in a broth collected inside the earthen pot. I enjoyed this pot much better as Mom made my favorite pork loin with peanut roots using it.

Gazing back across my field of kitchen memories, all these tools represented pictures of my life growing up with Mom in her little kitchen. Whether it was the sound of stone tools or the smell of herbal chicken soup being brewed in the evening hours, these recollections send me into a wave of nostalgia. Mom’s kitchen fell silent many years ago. But that kitchen lives on in my heart.