Home / Blog / The One and Only Sundry Shop

The One and Only Sundry Shop – a central feature of Malaysian life serving as shopping outlet, local market, and community center all rolled into one. 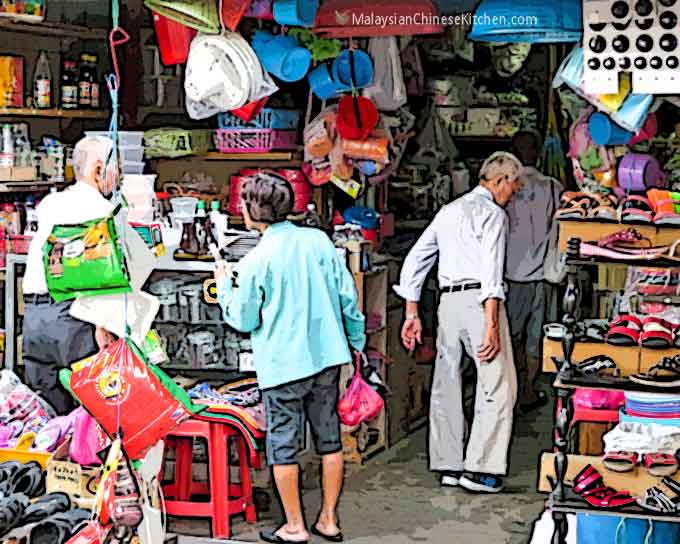 For most of the 20th and even now in the 21st century, life in rural Malaysia would be unimaginable without the ubiquitous Sundry Shop or chap hoi tiam in Hokkien. Long before the arrival of the supermarket or the hypermarket, there was the Sundry Shop. In the 1930’s through the 50’s my grandfather ran a sundry shop. The first one was in Bagan Serai, Perak and then in Ayer Itam, Penang. Dad told me that apart from selling dried foodstuff and manufactured products like towels, brushes, and brooms to the locals, the Sundry Shop also had to extend credit to the farmers as they could only pay after the harvest. Cash flow was a huge problem for many rural sundry shops.

As a child I was often intrigued by our two local sundry shops, Ah Chooi Sundries and Chop Chin Kee. Our family knew the owners of the two sundry shops as though we were related. In fact, Mom was the godmother to the children of one of them, since we were clansmen by surname. In return for this special kinship, Uncle Ah Chooi used to deliver our Chinese New Year supply of soda with extra bottles of Sarsi thrown in and a brown paperback filled with fireworks.

The other shop was owned by a bulldog of a man named Uncle Ah Choo, which in Hokkien punned with “Mr. Potato”. The latter had two sons who were pretty brilliant. One of them became a surgeon and had an on-and-off puppy love thing for one of my sisters.

My Trip to the Sundry Shop

I started going to the Sundry Shop on my own when I was seven. Sometimes it was to pick up stuff for Mom. At other times it was to buy my five cents’ worth of candy. Of course, the streets were much safer back then. 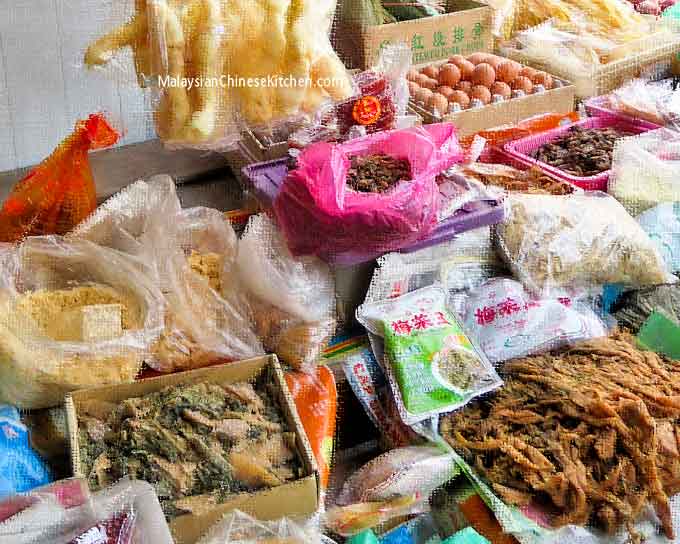 I liked bantering with this much older kid named Ah Chiang who worked as a delivery boy at Chop Chin Kee. The delivery boy had to be big enough to pedal and control the tricycle delivery cart. This was a big unwieldy contraption of half-bicycle and half-wheel barrow. He used to give me free rides home in the cargo compartment if he had a delivery errant further down the road. In the afternoons when things were a little slower at the shop, Ah Chiang would invite my brother and I to climb the mountain of rice sacks behind the main store. Up at the top of our perch, we would enjoy reading Lau Fu Tze comics until Ah Chiang got called to run another errant.

In the old days, anything we did not get from the wet market, we would buy from our local sundry shops. Ah Chiang or Uncle Ah Chooi will come by the house to deliver heavy items. These included rice, bundles of charcoal, and propane gas tanks. We could buy branded products like soap and detergents. There were also unbranded stuff like grain, spices, and even raw soap sold by the stick. The grocer would take out a brown hard soap stick and use a cleaver to chop it to the required length. 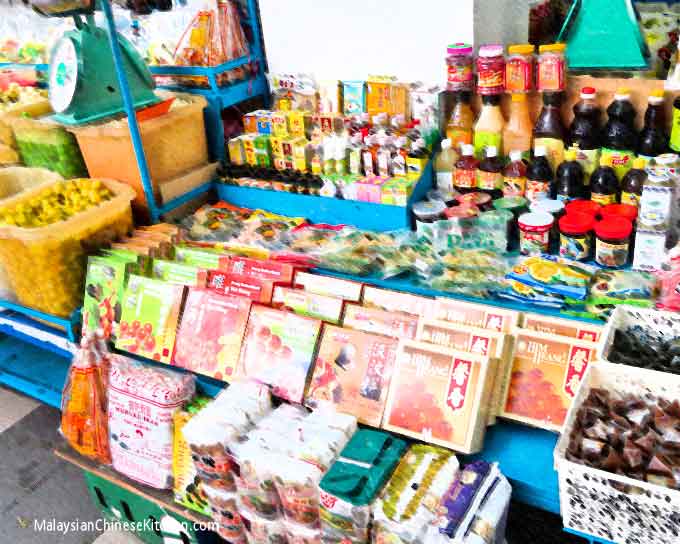 Strung outside the shop were packets of cheap toys made in Hong Kong. Water pistols, plastic racing cars, and dolls were popular back then. It was also one of the few places that had a refrigerator and icebox. This was before most households had their own refrigerators. It was not uncommon to see kids walking away from the Sundry Shop enjoying a piece of scrap ice courtesy of the owner as a way to win hearts and minds. 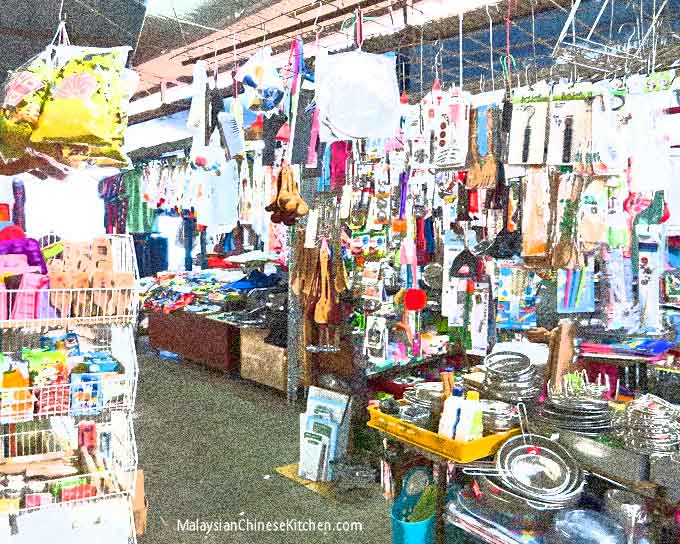 The layout of those sundry shops were pretty standardized. The main operating area was a long counter under which was a glass display so that the products in there can be seen. These were usually higher value personal items like handkerchiefs, socks, tools, and such. Huge shelves lined the walls up to the ceiling behind the counter where the owner stood. The shelves are normally stocked with beauty products, detergents, and stationery.

Opposite the long counter, across an aisle way is where the grain, sugar, salt, flour, and other bulk products were sold. There were measuring cans sitting on top of the open sacks of grains. These cans were the old measurement system. The smaller can was called the cupak. The larger one was gantang (volumetric measurements equivalent to liters today). For weights, the grocer used a traditional Chinese scale (ch’inthao) that measured out in catties and taels. People did not trust the mechanical scales because they suspicious that the needle could be adjusted.

I liked to see the running of the Sundry Shop during the peak morning hours. Our grocers would switch from Hokkien to Teochew to Bazaar Malay in seconds as they spoke to each customer. They would weigh out the products and wrap them into newspaper cones. After which, they would tie the package with twine running off a spool suspended from the ceiling. This was before the blessing and bane of plastic bags.

Occasionally, a British officer from the local Gurkha Regiment would appear. Ah Choo would call one of his sons to do the translation. Hardly anyone spoke English in the store. They did not use a cash register machine. All the calculations were done by memory and rote. The money till was a metal can hoisted up and down with a pulley and counter weight. This was an effective way to deposit money or to retrieve change for each transaction.

Social Life at the Sundry Shop

Apart from being the place to buy all kinds of things for the home, our two local sundry shops became the focal point for social matters. The main road passing by the sundry shops service the Gurkha regiments in the 1960’s. They were taken over by the Malaysian Rangers in the mid-70’s. It was not unusual for the army officers to get their sundries ordered and delivered from these two stores.

Local women used the sundry shops as their meeting point to discuss matters of the day a.k.a. gossip. Uncle Ah Choo and Uncle Ah Chooi have had to mediate over several overheated discussions. These happened in the vicinity of their shops that had nothing to do with themselves. In 1970, a new phenomenon struck the little community. Some rebellious youth proclaimed their support for Woodstock, Peace, and Love by making a chalk rendition of a long-haired mustachioed hippy wearing a big Peace sign on an oil drum. Parents were scandalized as the drum was placed strategically under a tree beside the sundry shops. It became the nightly haunt of a few long-haired guys until community leaders told them to take a hike or else….

The Fate of Sundry Shops Today

I visited the old neighborhood about 4 years ago during one of my trips back to the old country. The sundry shops are still there, now run by relatives of the original owners. The place was definitely quieter, the shops shabbier. There weren’t as many customers as the people no longer depended on these two sundry shops for their needs as there are several hyper market chains in the new city center. One of the current operators told me that it was getting hard to make ends meet, and if it weren’t for the dwindling number of old-timers who still came by to get some groceries out of habit, the place would have shuttered a long time ago. So this is the quiet crisis of sundry shops around the country….the demise of a long-cherished shopping tradition. 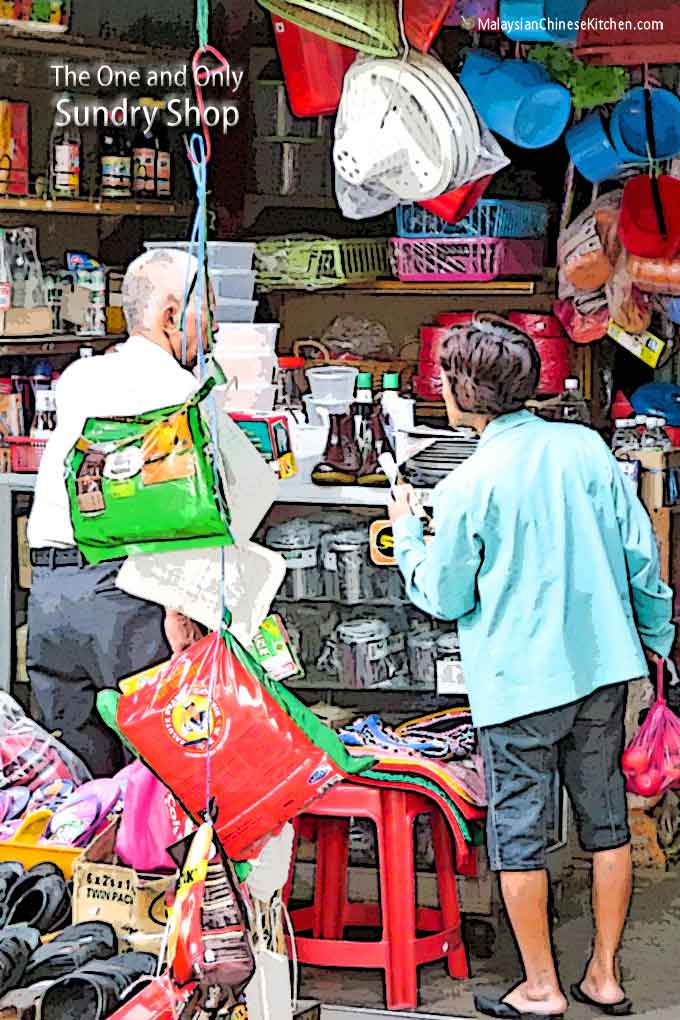