Papa – Remembrance of My Father is a tribute to my beloved father who was not in the kitchen but through self sacrifice ensured a good and stable home. 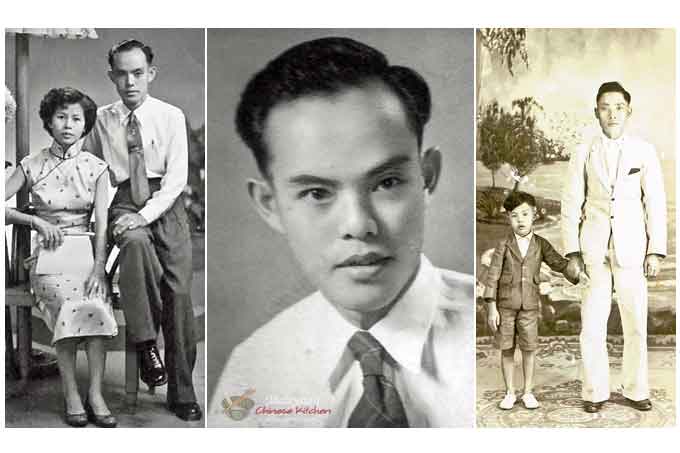 The last time I saw him, we parted at a busy mall in Penang. It was a strange and public place to say our last goodbyes. He had recently had a pacemaker implanted and seemed to be making some progress. After our lunch at Queensbay Mall, I was leaving for the airport and my brother was taking him home to rest.

We walked together for a while as though we were just window shopping. It was a seemingly casual scene but my heart was bursting inside. Something in his eyes as he looked at me told me that I would not see him again on this side of eternity. Papa was a man of few words. He spoke more through his eyes than his lips.

Papa was a child of the Depression. The year he was born (1927) was a high point for my grandfather. Ah Kong as we called our grandfather in Hokkien, greatly rejoiced at receiving a son the same year rubber prices ran an all-time high.

Flushed with cash, Ah Kong went to town to celebrate Papa’s birth. He bought a new bicycle and a gramophone, replete with two records. One was an American big band and the other had a pair of traditional Chiangchew ditties. I still remember one of them, “Tua Chia’ Cha Bor” or Ballad of the Big Lady.

Despite this promising start, the family fell into deep poverty in the 1930’s. After Wall Street crashed, rubber prices collapsed. Papa remembered his childhood trudging around Malaya with Ah Kong as they looked for work. They slept with only discarded newspapers for blankets and mattresses. Those harsh years left a deep mark on Papa’s character. It taught him about a cruel world and the need to earn a living. 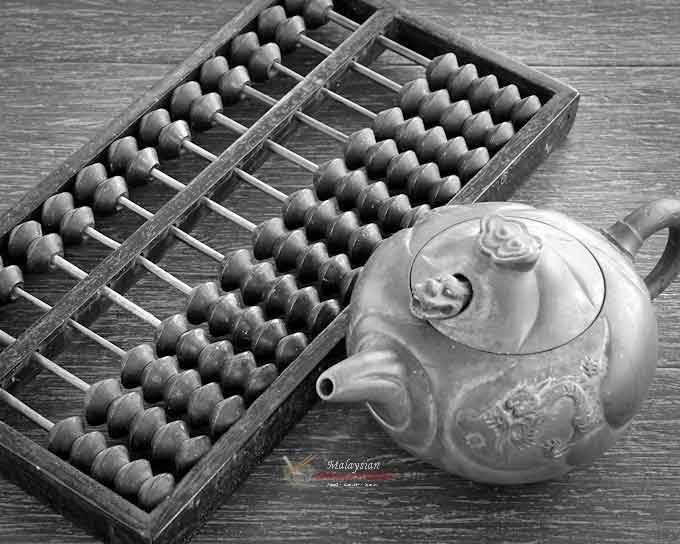 My earliest recollection of Papa was that he was a very serious person. He would come home from his day job as a accounting clerk at the iron mine and spoke only to Mom. He spent many evenings toiling at the abacus as he did freelance accounting work for several Chinese retailers in town. Whenever I hear the clacking sound of an abacus (rare even in Asia these days), the image of Papa comes to mind. I can see him in his singlet, horn rimmed glasses, and Bermuda shorts working on the books at the table. 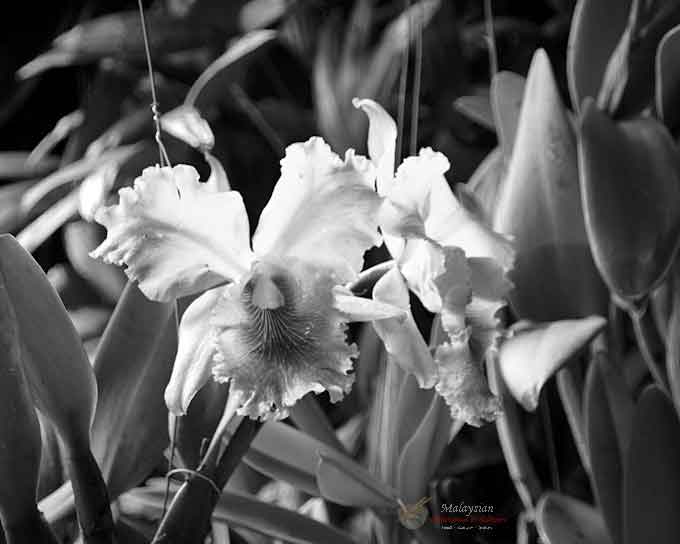 Papa loved orchids. If there was one pleasure he allowed himself in this world, it was this indulgence in those ethereal flowers growing out of wooden baskets. He had a green thumb and devoted his early evening free time tending to the flowers. He was pretty well-known in our neighborhood for those beautiful orchids. Those were the times I would see him relax and smile a bit more.

He would let me help with using a brick to crush charcoal splinters. Then, he would mix both charcoal bits and broken brick pieces to fill the orchid planters. Apart from going to the coffee shop on market days, this was the one activity I could share with Papa. It made both of us happy even though Papa never really chatted with me.

In terms of temperament, Papa and Mom were polar opposites. Mom was fiery tempered and extremely vocal. I reckon that I had learnt all my childhood words from her. Even the more colorful expressions of the Hokkien dialect came from Mom. Papa was quiet and seldom used words to express his emotions, and he never swore. I used to marvel at how Mom would keep a one-sided dialog for hours, only to elicit a single sentence reply or just a short “ha” (yes) from Papa. In that sense, he was a most patient man. Mom did however caution me that Papa had a temper and it could be fearsome to behold.

As I grew older I learned to recognize the red flash in his eyes when he was agitated or frustrated. I saw the laughter and twinkle at the corners of his eyes when he was amused. Most of all, I noticed that quiet look of pride and approval that meant the world to me when I did things right.

In our years growing up in that little house in Sungai Petani, Papa never talked much about his younger days. Occasionally, I would see old photographs from the 1940’s and 50’s of a scrawny young man with other friends but he never spoke about them.

Mom would tell us about how she met Papa when they were both accounting clerks at the Wong Loh Hun Accounting Office at Church Street in George Town in the mid 1950’s. It was she who taught him to speak and write in English, a major handicap for my Chinese-educated father. She spoke of how he had been so kind to her when she suffered from severe gastritis. He bought her meals out of his own meager salary when she could not afford it.

In 1988, Papa and Mom came to live with me when I was still working in Penang. Papa was able to meet up with some of his old friends. Apparently, one of them had passed away shortly after. That event must have triggered something in him because he started to tell me things from his past. The trickle became a torrent. Papa seemed to be unloading a part of himself that he had never allowed anyone in before.

He talked about losing half of his middle school classmates during the Japanese Occupation. He saw some executed and others taken away never to be seen. There were the bouts of malaria that he suffered living at the edge of a rice field during the war years. The end of the war brought no relief as the ripples of the Chinese Civil War tore through the overseas Chinese population pitting friend against friend.

Some of the people in those old photographs I had seen had joined the Communist movement and were never seen alive again. Papa wandered around Northern Malaya looking for work just as he did with grandfather more than a decade before. Sometimes working in tin mines and other times in rubber plantations. He suffered a serious gash in his left foot in a mining accident that dogged him for the rest of his life.

Prospects would have seemed very bleak for Papa without a formal education. It was a handicap not to be able to speak or write English in a British colony. Yet, he taught himself to do modern book-keeping while helping out with Ah Kong’s grocery store in Air Itam. 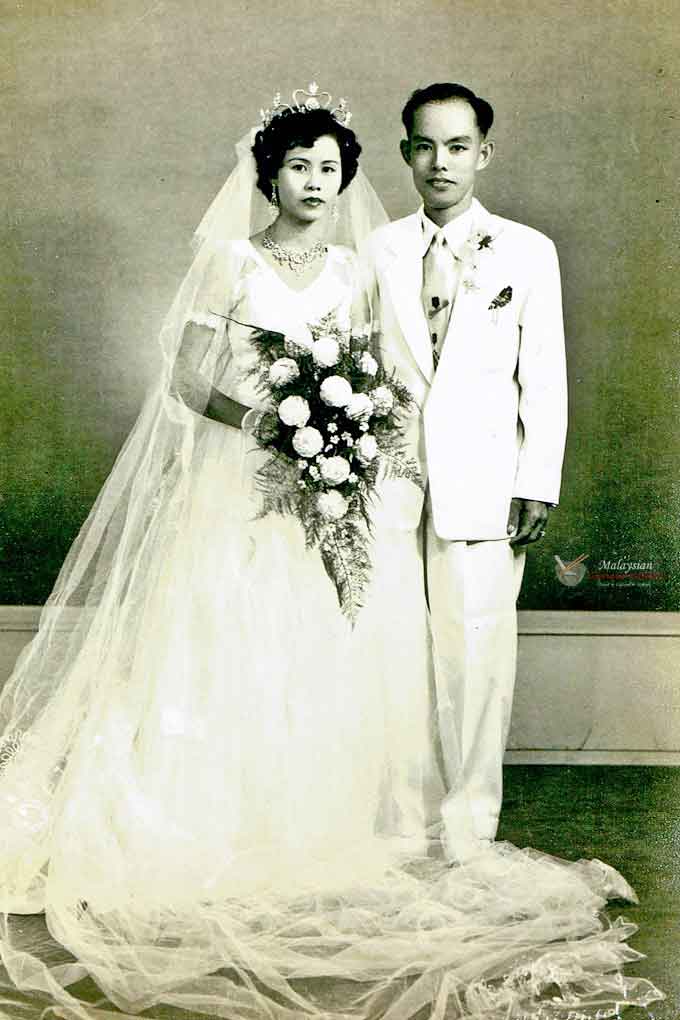 He learnt many Chinese dialects, Malay, and even a bit of Tamil. As a child, I was often amazed as Papa switched from the familiar Hokkien to Malay, and then to Tamil when addressing the Indian estate workers. Still, he was painfully aware of his lack of a high school diploma that limited his rise within the company. He often told me that it was absolutely necessary for me to get a college degree in order to be a better breadwinner. Whenever I felt discouraged, he would exhort me by saying, “You have to be better than me!”

Papa found faith late in life. When we were growing up, he was neither superstitious nor particularly religious. Like many other survivors of the Second World War, his immediate concern was to build a safe and prosperous life to make up for “lost time”.

After the passing of Ah Kong, Papa devoted more time to church. He became active in the Chinese-speaking congregation. He found joy and peace in reading scripture and talking to other seniors. During my last visit with him, he quietly said that he wanted very much to see Mom again and that she had waited long enough for him on the other side. Perhaps he was trying to imagine what she was going to say to him because for a moment, there was that cheeky twinkle in his eyes.