Mooncake Festivals of Yore – a reminiscence of the fun activities and special foods eaten during the Mooncake (Mid-Autumn) Festival. 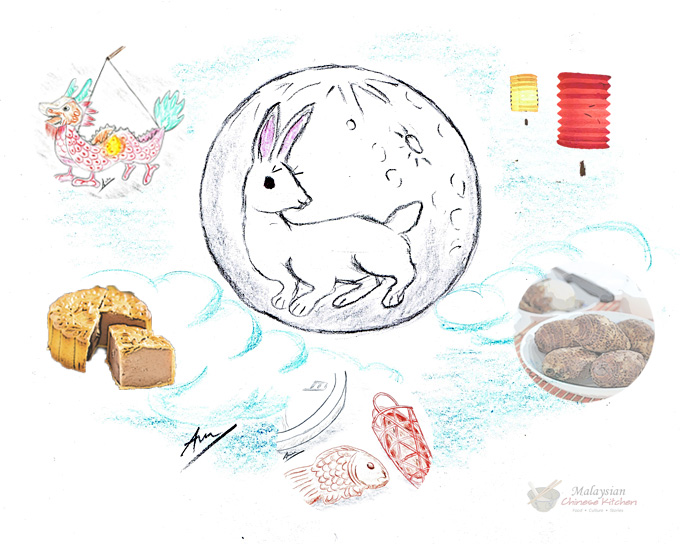 The onset of fall in Minnesota is accompanied by chirping crickets in the evening. The days become cooler and the days grow shorter. The harvest moon looms large, appearing all the brighter against the dark velvet sky. Looking at the moon reminded me of another fond childhood memory of celebrating the Mooncake Festivals that coincide with the 15th day of the 8th Month of the Lunar Calendar. This usually happen within 15 days of the autumn equinox. 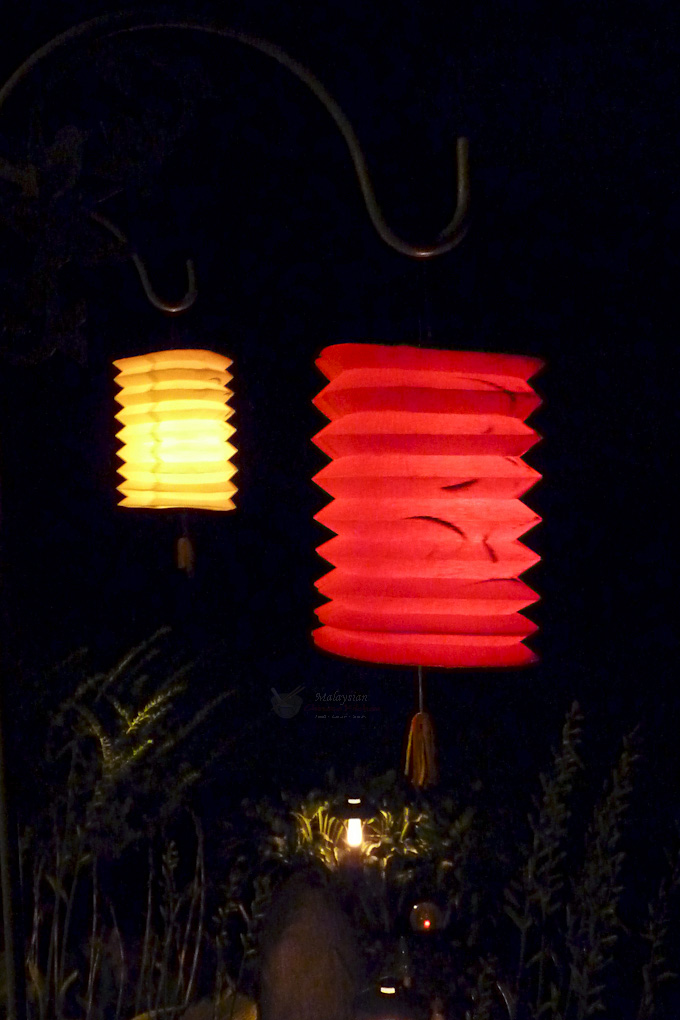 In my corner of rural Malaysia several decades ago, we really looked forward to this festival. The Mooncake Festival is also called The Lantern Festival, or the Mid-Autumn Festival (中秋节). Unlike the Chinese New Year festivities, there weren’t many taboos associated with this celebration. At least, none that were imposed on me! This was much more fun and relaxing for us kids.

There are several traditional stories associated with the moon or the mooncakes. My favorite one was about secret messages inserted into mooncakes during the Mongol Yuan Dynasty. It signaled a rebellion against the occupiers that brought about the end of Mongol rule in China. 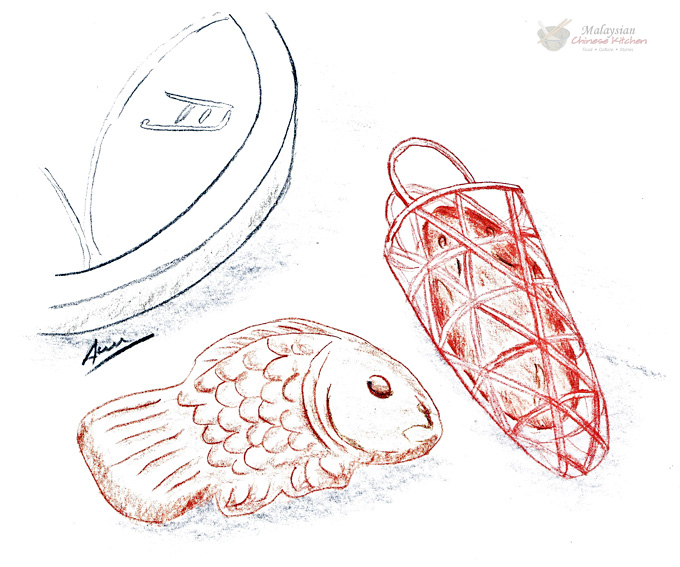 This festival was easy on the kitchen as compared to other festivals where Mom was always busy cooking. Mooncake Festivals were celebrated with store bought specialty cakes. The ones I remember from early childhood were brown cakes in the shape of piglets packed in little colorful plastic baskets called too kia na (猪仔篮饼). Little children were drawn to these colorful baskets. The fist-sized cakes were just about the right size for smaller hands and mouths to handle. A larger variant of this piglet cake was the fish cake. I always thought of that as the deluxe model. There was an even larger one molded in the shape of a Laughing Buddha. This one was the super deluxe model.

Another confection that I remembered Dad bringing home was the white, hard disk-shaped cakes called gue’ ko (月糕). These were normally molded into the shape of Chinese coins about 5 to 6 inches in diameter. They were made from either sago or glutinous rice flour with lots of sugar. It was very sweet and had a hard crumbly texture. One could not eat a lot of it as it sticks in the mouth. Until I was older, I always thought that “mooncakes” referred to this particular cake. In recent years, this white cake has wane in popularity. They have been supplanted by the more popular mooncake gue’ p’iah (月饼) with sweet lotus paste and egg yolk filling. 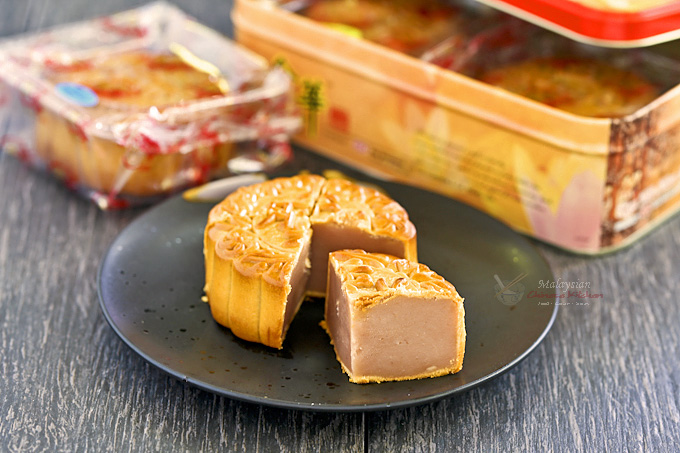 Today, “The Mooncake” (月饼) is a golden brown crust confection. This cake can be filled with a variety of sweet pastes (lotus seed, red bean, or mung bean) and often with a salted egg yolk in the middle. Over the years, mooncakes have become increasingly expensive. There are many new flavors like durian, yam (taro), and pandan. The crusts have also become varied, notably soft “snow” skin and crumbly textured ones. Back in my childhood, they were usually filled with lotus or red bean paste. To this day, I prefer the ones without the salted egg yolks.

Other Special Foods for Mooncake Festivals 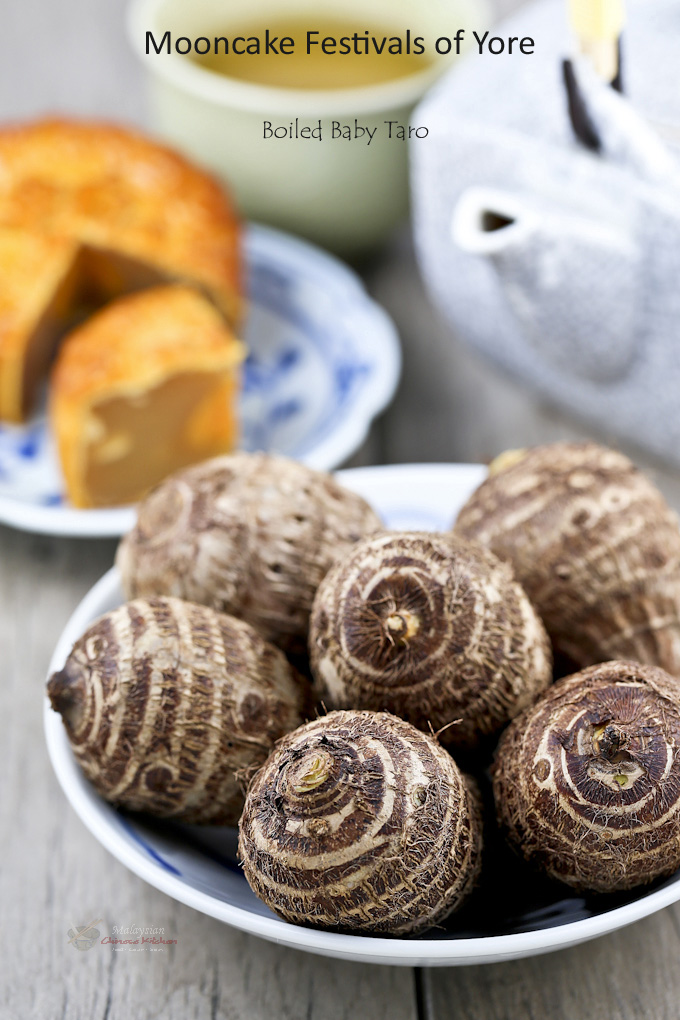 I wanted also to mention about Boiled Baby Taro. This treat is popular among the Hakka and the Cantonese. In our Hokkien Baba household, the baby taro was not a tradition although I did remember my father bringing some home one year. The baby taro was boiled, peeled, and eaten with a dip of sugar and salt.

Another specialty food was a nut known as leng kak or water caltrop from China. This strange nut has a shape like that of a pair of horns, hence the name “dragon horns” in Hokkien. Eating water caltrop was hard work. We had to use shearing pliers to open the tough shell.

No Mooncake Festival celebration would be complete without the nightly lantern walks around the neighborhood. In those halcyon days, it was very safe to walk about even after dark. Kids would be out with their lanterns two to three weeks leading up to the festival.

We looked forward to getting our new lanterns. Grocery stores would stock up with red glass-paper lanterns of all shapes and sizes hanging from the rafters. Back then, the hot favorite was the dragon with a movable head. My elder brother always got the dragon, while I had to be content with an ox or a rabbit. In later years, battery-powered tanks, jets, and space rocket shaped lanterns took over the top spot. 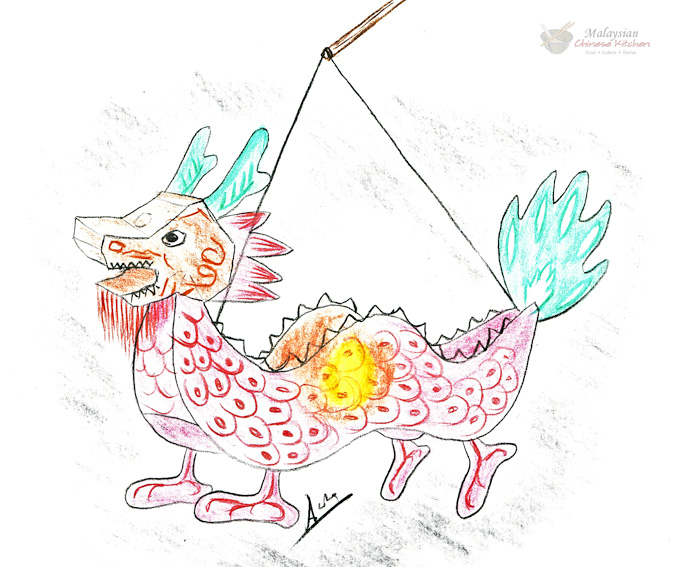 Since our lanterns were candle-lit, we had to be careful that the flame did not catch the lantern when walking about. Hot wax splattering onto the glass-paper could also burn huge holes in the lanterns. Many a child have had a premature end to their lantern-carrying season when their prized possession caught fire. Even so, this did not deter boys from “fighting” their lantern animals by knocking them together. Those were the fun-filled, worry-free days. 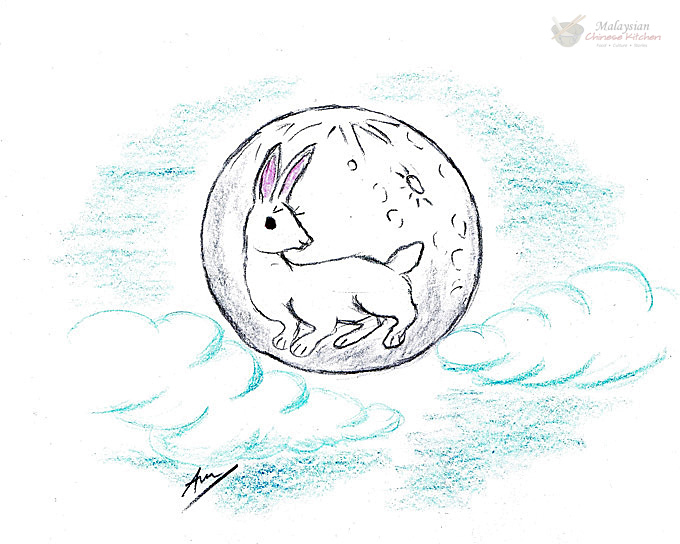 The Big White Rabbit on The Moon

One thing that has not changed over the years is that huge moon hanging in the early autumn sky. According to Chinese folklore, there is a big white rabbit pounding away at a mortar on the moon. As a kid, I used to imagine that I could catch a glimpse of it when staring at the moon. Now, there are lots of rabbits running around my yard in Minnesota but they are all brown cottontails. None fit the bill of the shimmering white Jade Rabbit on the moon. 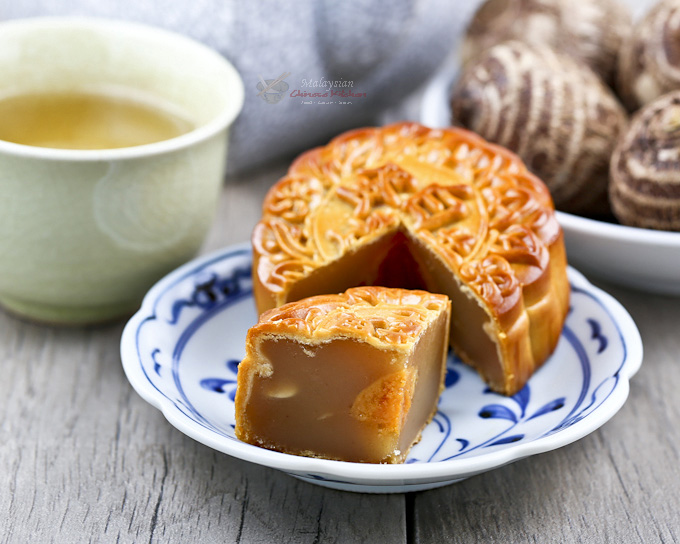