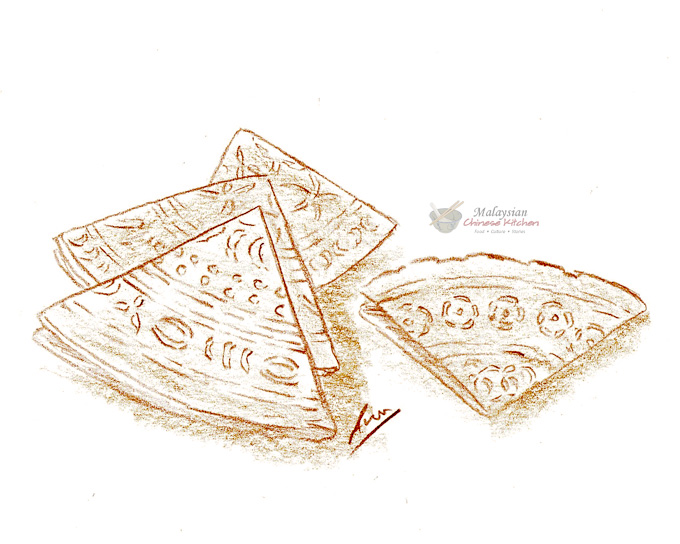 I miss celebrating Chinese New Year. Here in the Upper Midwest, Chinese New Year is just another workday in the midst of winter. Even if I took personal time off, with my grown children away from home in campus it is just not the same. It is during such times that my thoughts drift back to the celebrations of my Malaysian childhood, the sights and smells of the Lunar New Year from yesteryear.

The surest sign of New Year preparations in my old neighborhood was the distinct aroma of kuih kapek (love letter crepes) being molded in their irons over charcoal braziers. Since most families do this in their backyard kitchens all facing each other across the alley, it was a pre-festival party of sorts for the kids as we were already raiding the cookies even as they emerged and get folded into fan shapes. We were always looking for “defective” cookies as treats and with several braziers going on, there were bound to be some.

The story about why these treats are called “Chinese Love Letters” seemed to harken back to days when Peranakan girls were not allowed to meet boys their own age without chaperons, but some intrepid maiden inserted little slivers of notes into the folded kuih kapek and toss them over the wall for the heart-throb next door. As stories go, apparently it was the guy’s younger kid brother who retrieved the “letters” and spilled the beans to the whole neighborhood.

The other classic confection for the season was Kuih Bangkit (Tapioca Cookies), a powdery sweet cookie made from tapioca flour pressed into wooden molds (normally in intricate floral or animal shapes). These have to be knocked out of the molds, laid out on pans and baked in an oven. Unlike the previous kuih kapek, opportunities for scavenging were far less for kuih bangkit. One of my older sisters had the task of dotting the shapes with little red dots to signify “eyes” for the cookies. Once I attempted to perform this task and ended up with a red-headed bird (I had not yet developed my fine-motor painting skills) and was promptly shooed out of the kitchen! 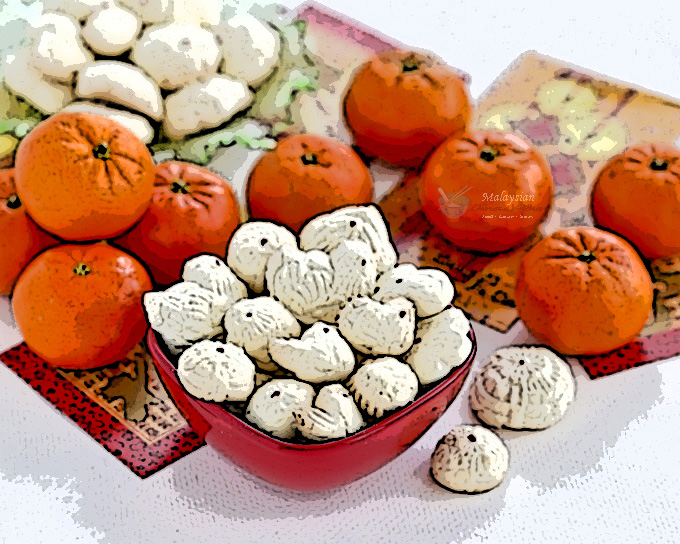 In its original context, Chinese New Year coincided with the beginning of spring in central and southern China with cooler, dry weather. However, January in Malaysia is normally hot and sweltering. In the northern part of Malaysia, that period is marked by hot and dry days without a single drop of rain. Since Mom insisted that we all wore our new clothes for the first three days of the festival (Chinese New Year runs for 15 days), I was always itching under the fabric, hot and fidgety. The Peranakan vernacular word for itchy is “gatai” and I was really suffering from a bad “gatai” fit. It was always a relief at the end of the day to take that cold shower and a change into my comfy PJ’s!

Mandarin oranges are a big thing for the celebrations as the bright orange fruits signify gold, hence wealth in the Chinese culture. As these fruits do not grow in the tropics, Malaysian Chinese communities import these by the boatload from Southern China. Among mandarin oranges, the most prized are the ones from Chiangchew region in Fujian province as these are especially sweet with very thin skins and very little rind. Dad used to order these by the crates because mandarin oranges are de rigeur as symbolic gifts to the extended family and neighbors. As a kid, I ate lots of oranges during the festivities and suffered the occasional sore throat (old wives tale attributed that to taking too many mandarin oranges, I think it has to do with the hot and dry weather). 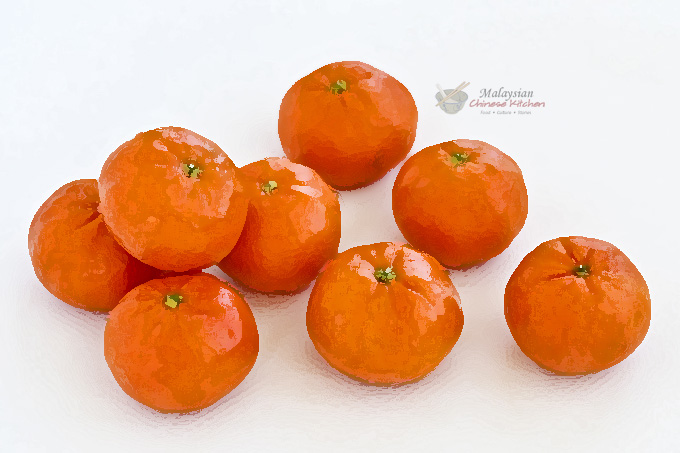 The big family reunion dinner on New Year’s Eve was and still is the biggest meal of the year for most Malaysian Chinese families. In my childhood, Penang families would serve Nyonya Chicken Curry as the central dish for that dinner, together with Jiu Hu Char (Stir Fry Jicama with Cuttlefish), Nyonya chap chai (mixed vegetables) and a special chicken soup replete with button mushrooms, straw mushrooms, bamboo shoots and even sliced abalones (the last ingredient disappeared in the late 1970’s).

Later on in my adult years in Kuala Lumpur, my in-laws served Cantonese style Chinese New Year dishes on the morning of the first day with auspicious names like ho see fatt choy, and chai choy that were very different from my childhood dishes but equally as tasty.

After all that feasting and eating, the highlight of the festival was for kids to collect angpow (red packets filled with money) from our elders. It was the only time in the year that I raked in my entire year’s income as a primary school student (that’s elementary school in the US). My brother and I used to make all kinds of plans on what we were going to buy for ourselves on our first trip to the city after the holidays. Those plans were quickly scaled down when Mom made us put most of it into cash savings. Sigh…reality check! The more things change, the more they stay the same! 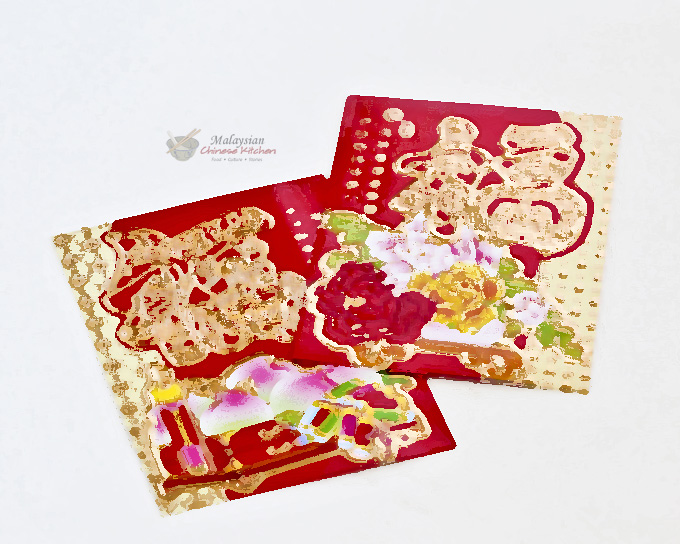